This is a writeup of the Indianer challenge from Hack.lu 2017

The challenge was tagged Web/Pwn.

Initially, the challenge included a binary and a link to a regular website that had a “super secret” backdoor.

After downloading and unzipping, we noticed the .so file header on the binary, indicating that it was a shared object. This meant it was a small part of a code base that we did not have access to. There was also nothing that could be executed within the file meaning dynamic analysis was not a plausible strategy. Fortunately, after opening the file in Binary Ninja we uncovered a few key points that brought forth some clarity.

The binary was loaded before libc to overwrite the strlen function. Analyzing the control flow of strlen revealed the abnormality and exploit.

First off, there was a call to system in this block of the function, so the remainder of our exploitation was geared towards writing into the function call to leak the flag.

Looking back at the start of the function, strcmp is called at 00000a0c checking if data_da0, or the string ‘GET’, as indicated in hex view, was the request type. Trigger, a variable in the GOT, was incremented if that was the case. 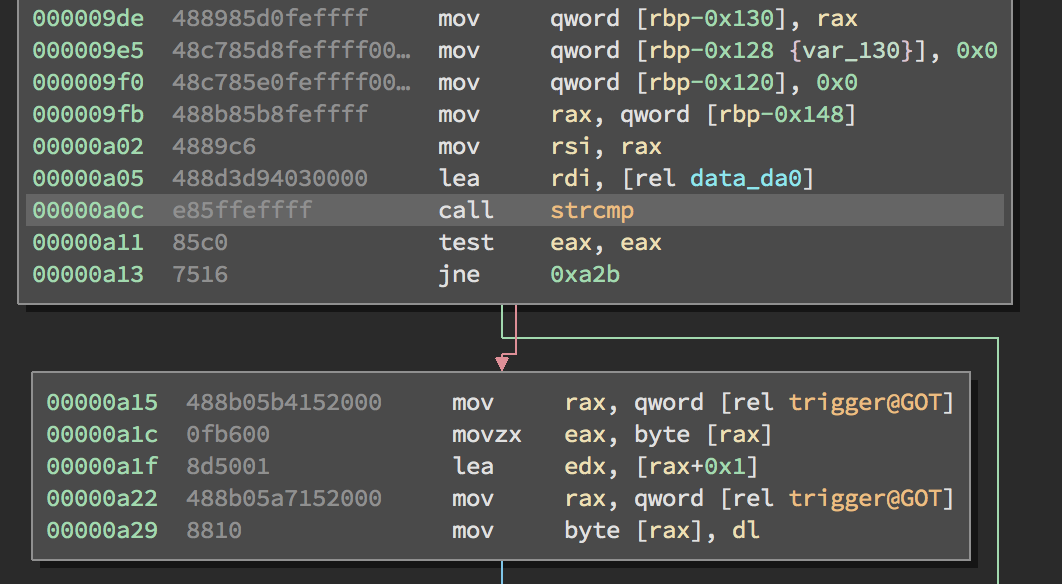 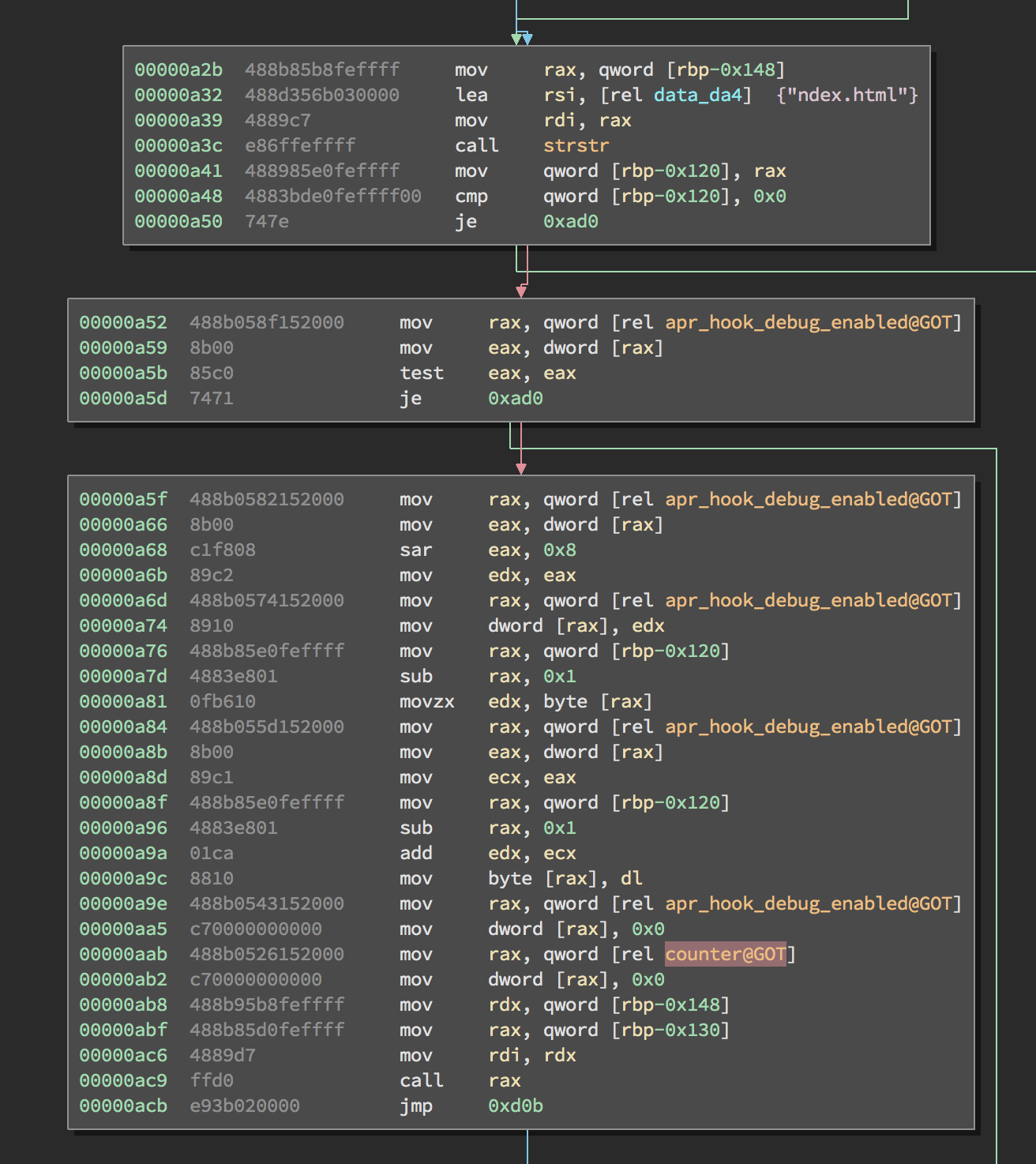 After a successful GET request, the message would be directed to this block of code: 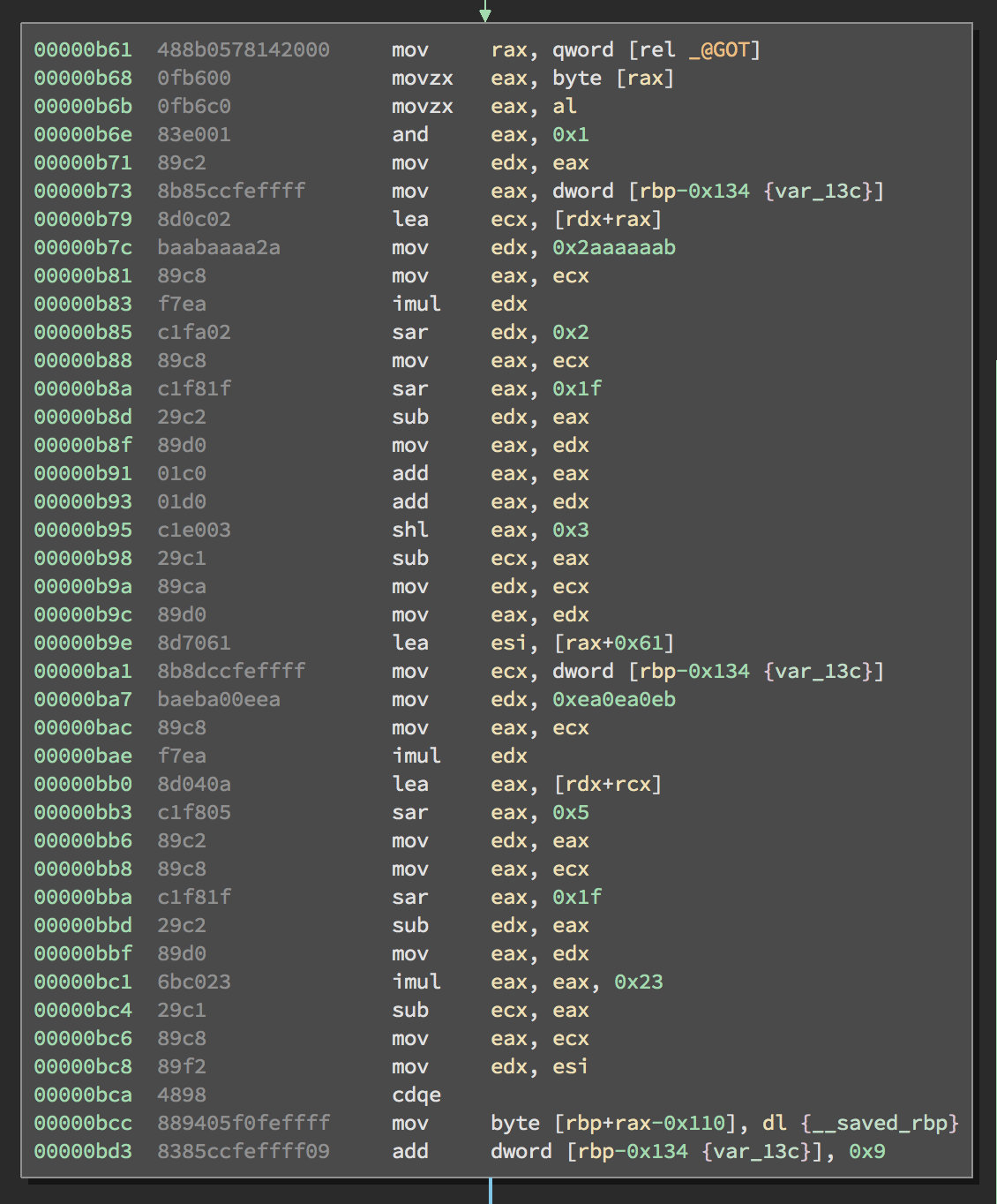 There, an algorithm with ordinal operations, bit swapping, and string operations would be implemented on the variable _ , and the counter and trigger variables would be updated accordingly. _ was set to the ordinal of ‘n’. From there the algorithm used _ to set the value of a magic string needle. If needle was set to the right value by the end of all the string operations and sent within a GET request, command injection would be possible. The binary checks if the next character is an ‘=’. Everything past the ‘=’ would be sent to the call to system.

Reproducing the needle was starting to get slightly more difficult, so we decided to open up the shared object binary in IDA, and used hexrays to decipher what the algorithm was doing with the _ variable in the GOT. 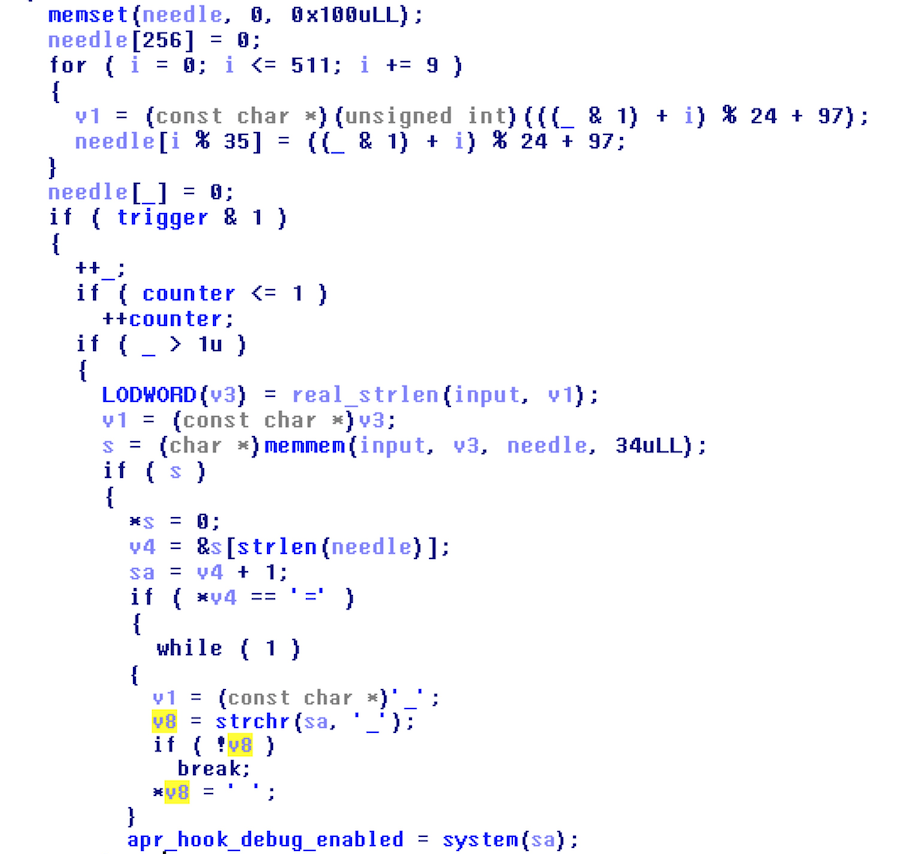 As you can see it is much neater.

Afterwards, all characters equal to ‘_’ in the request would then be replaced with a space.

We used this code to write a python script that reproduced the magic string with some help from our friend Josh, another member of NYUSEC.

The output of the script was …

So we had successfully recreated the magic_string!!!

We knew that the HTTP Request was formatted like:

We tested with the following command

There was a successful sleep!

With access to remote code execution, we first tried to see if sending the flag to ourselves via netcat was possible. However, after failing to send /etc/passwd, a file existing in every linux box, we came to the conclusion that outbound connections were blocked. Either way, the location of the flag was still a mystery.

At this point, we reanalyzed the binary to find any missing information. Looking at the debug global we noticed earlier, we saw it was set to the return value of the call to system. The value of the debug global is then added to the character directly before “ndex.html” in the HTTP request and reset to 0. Knowing this we tried the following request:

The resulting page is shown below:

The page tells us that The requested URL /5ndex.html/ was not found on this server. The difference between the first character of our input 0ndex.html and the return of the server 5ndex.html is 5 meaning that the call to system was a success and we can access the exit codes of our commands.

After some testing we discovered that we had access to inline python. Running the command:

Returned an exit code of 5, confirming that the code was successfully running.

To find the flag, we wrote a simple python script to search through all the subdirectories of a given directory to find a file containing the string “flag{“. A counter is used to indicate which character in the file to exit with. By observing the exit codes as we progress the counter, we should be able to read the file containing the flag. If no file with “flag{“ is found, the script exits with 5. We also realized that there would be errors when attempting to read files we did not have access to. By wrapping the file open in a try block and excepting on IOErrors, we were able to avoid the problem.

The script needed to be transformed into a one liner, so we converted newlines to \\n and tabs to \\t. The newlines and tabs needed to be double escaped because python would attempt to resolve the escapes. We also needed to double escape our quotes to avoid problems when wrapped in an exec for the inline python command. This resulted in the following command:

We then wrote a script to send the appropriate requests to the web server and parse out the exit code.

We replaced all slashes and plus signs to their url encoded versions. Spaces were replaced with underscores, because the binary would convert them to spaces for us. The server was a bit unresponsive and would error out at times. In some cases, we would receive a bad gateway error, so if we did not reach a page that contained “Not Found”, we retried the connection. In cases where the backdoor was not processed, the needle was not parsed out of the url, so we checked for needle in the response. On successful requests, we parsed out the character directly before “ndex.html” and found the difference from ‘i’ to get the exit code. We noticed that there were times when the call to system would not go through. In those cases we received an exit code of 0 or 2 and retried the request. On success, we increment the counter and repeat. We also noticed that if we sent a normal request between each repeat, the server behaved a bit more consistently.

Attempting to run the python script resulted in an exit code of 2 almost constantly. In several very short bursts we were able to see the expected error codes. We were unable to find the flag in almost all of the standard linux folders (/var, /tmp, /root, etc.). We then attempted to list the root directories with the following python script.

However, progress was slow because of the constant exit codes of 2. We assumed that there were only a few functioning threads. Working off that assumption we tried to hang a connection with the nano command. Our python script immediately began to return the expected error codes. Looking back, it was most likely just weird behavior on their server.

Now that we were able to consistently run our python scripts, progress was much faster. The root directory contained just the normal Linux directories. We then looked through the directories to see what we could find. Looking through /var/www/ resulted in finding a flag.txt file. We used the following script to read it:

The file contained the flag:

We then realized why our initial search for “flag{“ turned up empty. Flag was written in caps!

Despite the server issues, overall it was a fun challenge.

For file downloads, navigate to https://github.com/svv232/Indianer-hacklu-2017